Blue – Original route to be restored

Interested in our Development plans for the future of the Derby Canal? Our Long Terms Plans can be found here.

A supporter, Andy Savage, has produced an excellent set of information about of the Derby Canal, including 360 views at various locations along the route, superimposed over Derby using Google Maps. Please click on the map image to the right, to be taken to his map. He has lots of other photographs in and around Derby at www.derbyphotos.co.uk.

To view a more detailed downloadable map please click the button below:

This will take you to the website of Waterways Routes who support canal restoration organisations by providing free maps of canals to be restored. These are available as printable PDFs or Memory-Map’s QCT format for use on computers, Androids and iPhones/iPads with real-time tracking (like sat-nav) on GPS enabled devices. The Derby Canal map is contained in a grouping with the Cromford, Nottingham and Nutbrook Canals and in the PDF version can be found on pages 9 to 14. Waterways Routes also offer a full range of cruising guides, maps and DVDs covering the whole canal network. 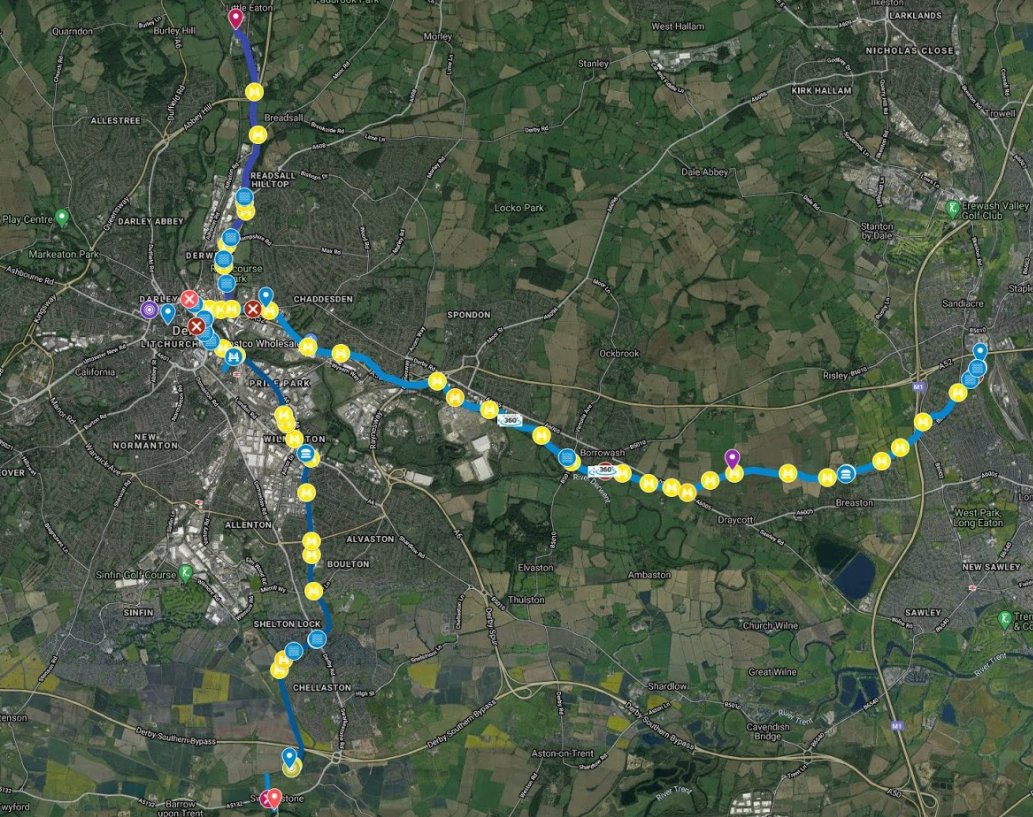 The Derby & Sandiacre Canal ran from the river Trent at Swarkestone and climbed through 3 locks to the Trent & Mersey Canal and Swarkestone Junction on the Trent & Mersey canal thence to Sandiacre on the Erewash canal, with a line to Little Eaton where it met a plateway. There was also a branch to the river Derwent in the city centre, which enabled boats to reach the Silk Mill and the mills and foundries further up the river to Darley Abbey.

There were 9 locks on the main line, 5 on the Little Eaton line and one on the river branch and they were built to accommodate Trent barges, the dimensions being roughly 90ft. long by 15ft. wide with varying depths. Of the total, 6 are still in existence, albeit buried. The 3 locks at Swarkestone fell into disuse early on and are buried in the garden of a house in Swarkesone.

A memorable feature was the crossing of the Derwent in Derby on the level, with a long towpath footbridge and weir. The weir is still there close to the Council House. The branch to Little Eaton had an interchange with a horse-drawn plateway which utilised possibly the world’s first system of containerisation. There was a 3 level bridge at the cattle market, the 2nd level of which was one of the 1st cast iron aqueducts in the world. and a wide variety of goods including, coal, charcoal. chert, and milk bound for Cadbury’s at Bourneville were carried.

Competition from railways and roads led to a general decline and was closed to traffic in 1946 and abandoned in 1964, to facilitate the building of the M1 motorway. The line of the canal is 75% intact and has a multi user trail along it; this will be retained when the canal is re-instated.

See ‘The Canal, Its History’ for more.

Leisure and Recreation on the Derby Canal

No building has taken place on the line of the canal except in the city centre. The path which is there is suitable for both walking and cycling. Disabled access is available from; Swarkestone to Anglers Lane, Spondon, from Station Road, Borrowash to the Ockbrook and from Derby Road Bridge, Draycott to Sandiacre Junction. The whole route will be accessible to all when the canal is restored.

There are many walks and cycle rides complimenting the canal route and leaflets are available in local tourist offices and Long Eaton Town Hall. The Midshires Way long distance footpath crosses the route at Breaston and the long term aim is a route from Derby to Nottingham completely traffic free.

The Derby canal route is a wildlife haven, from the heavily wooded stretch at Swarkestone/Chellaston through urban Derby to the open countryside from Borrowash to Breaston. There is a great variety of wildlife to be seen. Foxes, badgers, rabbits, hares, and weasels abound and in the short stretch at Borrowash which has been dug out, there have been sightings of kingfishers and herons. Other wildlife known to live here are smooth newts, frogs and fish and not too faraway there are water voles. The lay of the land at Draycott lends itself to ground nesting birds such as the skylark. Lapwings are also common here. The Trust has planted a traditional hedge at Draycott, a great attraction for the wildlife.  A large proportion of the original hawthorn hedgerow is still on the canal, providing food and shelter. The Trust does it’s own hedgelaying.

Although the Derby is not in water, both ends of the canal can be reached and explored from the Trent & Mersey or the Erewash canals.

Commercial Use of the Canal

It is envisaged that full commercial use of the canal will be made, particularly for carrying waste to reclamation sites nearby e.g. organic matter to Stanton Ironworks site on the Erewash canal.

We will be adding bespoke walks around the towns and villages that follow the canal line, created by our members. These walks are available to download as PDF via the links below. As we create more they will be added.