In 1792 a committee of businessmen commissioned Benjamin Outram to survey and estimate for a broad canal to run from Swarkestone to Denby in the Bottle Brook Valley north of Derby, with a branch to Sandiacre on the Erewash Canal. A branch to the Trent at Swarkestone was also included. In the event the high cost of crossing the Derwent in Derby and the steeply graded Denby line resulted in a tramroad being built from Little Eaton to the Denby collieries. It was, at the time, proposed to build a canal parallel with the Trent but his was dropped as Jessop, who had been consulted by Outram, believed the Trent adequate and few boats would use the canal.

The Derby Canal was first advocated by James Brindley in 1771 as the transport system in the town was poor, the roads were inadequate and the river Derwent was prone to flooding; downstream traffic was also slowed by delays on the Trent. Coal in particular was expensive in Derby despite the proximity of mines in the nearby Bottle Brook Valley, which were un-developed and unprofitable due to a lack of suitable transport.

It was first proposed to link the Trent & Mersey and Chesterfield canals via Derby but vested interests scuppered this until 1791 when proposals were made for a Swarkestone to Nottingham canal with a branch to Derby from either Swarkestone or Shardlow. 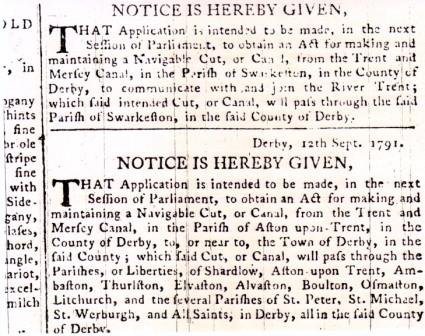 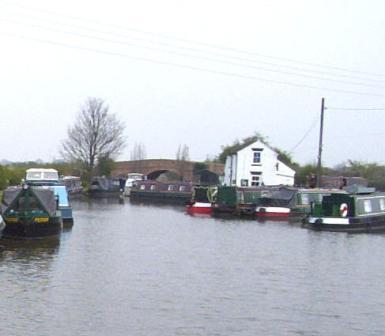 Swarkestone Jct, with the T & M in the foreground and the Derby Canal Toll House.

Jessop’s recommendations were accepted by Outram and the proprietors except for the location of the junction at Swarkestone. His recommendation to site the junction below rather than above Swarkestone lock on the Trent & Mersey, due to geological conditions, was ignored by Outram and the stretch to Cuttle Brook is sited on a gravel bed which moves due to the gravel acting as a liquid. We will solve this when we rebuild the canal with a junction below Swarkestone lock.

The canal was to be built as a broad canal, capable of taking trent barges, the locks being 90ft long and 15ft wide and the depth was 5ft. To reduce costs, the canal was to cross the Derwent in Derby on the level rather than an aqueduct; the level being maintained by a weir and a wooden bridge would be provided for the horses. 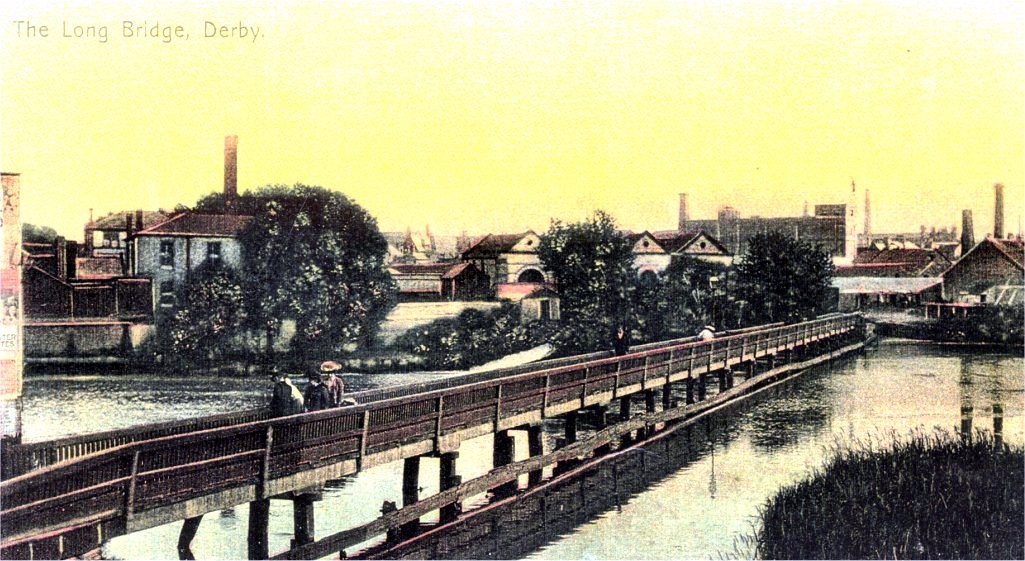 This plan was accepted and the petition to parliament was presented on the 2nd of February, 1793, with Royal Assent being given on the 7th of May, 1793. Try doing that today! A branch through Phoenix Lock to the river at the Silk Mill just below St. Mary’s bridge was also constructed, giving access to the foundries and factories up to Darley Abbey. This formed a feeder for the Sandiacre branch and the feeder for the Swarkestone line was by means of an inverted siphon built into the long bridge weir, the total length of which was ¼ of a mile.

The canal was to be carried over a mill race at the Holmes by means of a cast iron aqueduct and above this was another bridge carrying Cattle Market Road giving rise to a three level bridge. 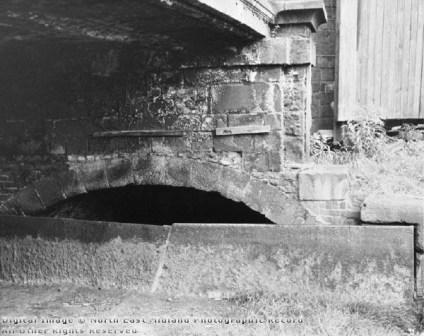 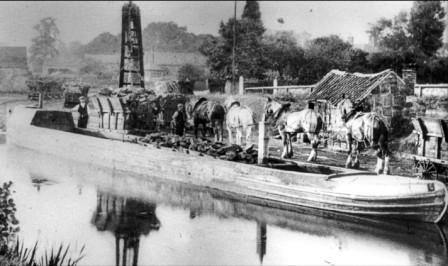 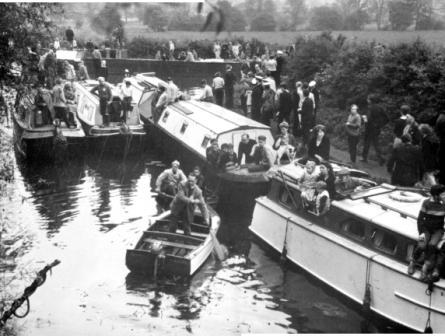 The Little Eaton line and tramroad were completed by May 1795 and the first coals were delivered to Derby 4 days later, to be distributed for the benefit of the poor, which was a condition of the Derby Canal Act. Work on the Swarkestone line started in June, 1796 and the entire canal was finished one year later. A unique feature of the tramroad was that the bodies of the wagons were lifted from the wheelsets and placed directly in the waiting narrowboats, and when they arrived in Derby they were lifted out and placed on carts for haulage around the city.

This method was probably the first form of containerisation in the world, multi-modal transport in today’s terminology.  The cost of building the canal in today’s money is around £60 million.

The canal prospered but then suffered from competition from the railways and was slated for closure before the second world war; however the War Ministry decided that it could not close for strategic reasons and it remained open, with the princely sum of £1 being taken in tolls! 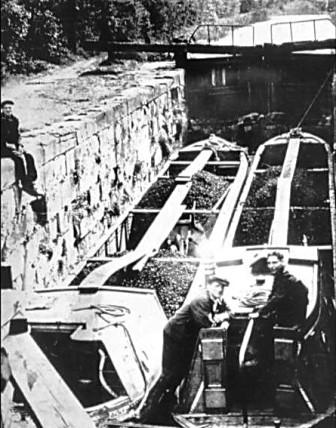 Because of disuse and neglect the Derby Canal was not nationalised. The IWA lead a protest cruise in 1961 to maintain the right to navigate but the canal company felled two trees across the lock, resulting in the last protest that the IWA lost.

The last attempt to navigate commercially was in 1946 when the motor and butty Atlas & Vela were prevented from doing so by the Canal Company, who locked the gates at Sandiacre Junction lock (both boats have survived and guess which boats will lead the parade when the canal re-opens!).

The Department of Roads (sorry, Transport) then did a deal with the canal company whereby they gave a Warrant of Abandonment in return for a strip of canal bed at Breaston upon which they built the M1. Needless to say, they had already started to build this and had told Derby City Council to demolish the city centre line to build yet another road. 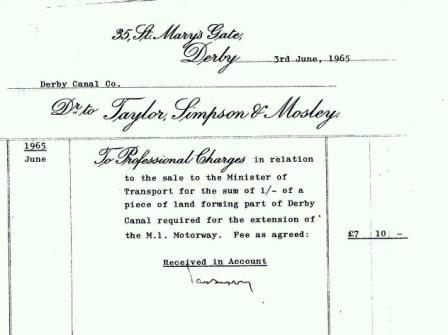 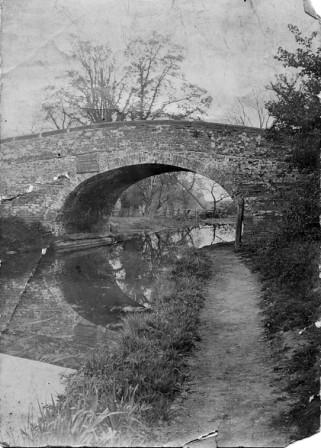 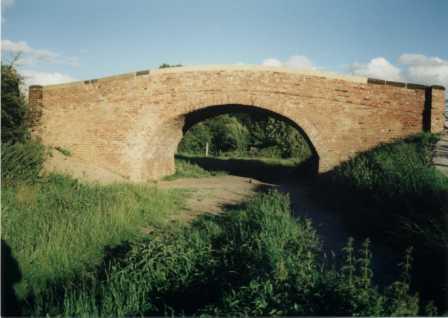 … and the present day, after rebuilding by the Trust.

A Desire for Restoration

Fast forward to 1993 when Paul Turner, a farmer in Breaston, had the idea that if he restored the canal at the bottom of his farm, it would act as a moat. When he approached the local council they said yes, but the whole canal had to be restored!

Luckily in 1964 when the bed was filled in, the councils concerned decided that nothing would be built on the line where it still existed, just in case it was ever restored – far thinking for those days. The line is protected in the various local plans and an outline planning application was been made and permission has been granted. From then until now, we have been raising funds for the usual 1,001 studies, rebuilt two spring arched bridges and a lock.

Our canal will be vital to the Erewash canal as it will keep them open all year, whereas it can be shut for 8 to 12 weeks of the year due to flooding of the Trent and Soar rivers.

It will form a 25 mile cruising ring with 18 or 19 locks and will attract people to Derby, which has a World Heritage Site in the form of the Derwent Valley Mills. There are around 3,000 boats moored locally and there is also a Canaltime hire fleet operating 90 boats, 48 weeks of the year.

The Trust has a mission to restore the canal to navigation, the canal was authorised by the Derby Canal Act of 1793, and now has planning permission.

Help us continue our restoration work by becoming a member.  Find out more on our Membership page.

Explore the canal line, learn about its history and our current progress by visiting the Route Map page.