I hope you are all enjoying the sunshine and showers of summer. I’m sure we are all thinking of holidays and no doubt with the travel challenges at present staying in the UK and particularly on the ca-nals is likely to be at the top of our list.

I hope you’ve had the chance to visit the café now and sample the fare and friendly service. Business has been brisk and since the opening 6 weeks ago it has remained at good levels. So much so that Joyce and Garry have decided to have a day of much needed rest, so it will now be open only 6 days each week and closed on Tuesdays. Thanks to those who have visited and offered suggestions, most of which have been taken on board enthusiastically.

The most important of which is that the first floor meeting rooms will be let out for use by local groups, etc. We’ve now installed blackout blinds so we won’t need to worry about being blinded by sunlight. The Trust will take a small income from this, so we’re keen to promote their use. The arrangements can be made by contacting the café.

As far as works on site are concerned, the “museum” back stairs have been refurbished and the plastering is complete, with painting progressing well. We’ve added barriers around the grass at the front as the residents were being bothered by people looking into their windows! Hopefully the novelty is wearing off now, particularly as our last cottage has been let and tenants are in occupation. We’ve also started to clear the canal route opposite. Just the ground floor museum to paint and fit out now.

As you’ll know if you were at the last meeting we will now be having a presentation on the restoration of the complex at the members’ meeting on 28th June.

Working parties have continued apace in our normal locations at Borrowash, Spondon, Draycott and Breaston with work also progressing to get Sandiacre Lock ready for relocation of the sewer by contractors. Our volunteers have been making full use of the tractor, mower and brushcutters. And we are still receiving interest from new people offering to give their time. Thanks are due to all of them and in no small measure to Dave Savidge, who coordinates and plans the activities. As in any close team, he of course suffers constant barracking and teasing for his pains.

Key achievements by the team have included the completion of the wing wall at Borrowash Lock, bramble beating along the canal line at Borrowash and off-side clearance at Draycott.

At Sandiacre Lock the team has finally managed to dig out the two stumps alongside the lock, so there’s now a clear run where the new sewer needs to go. The picture shows them being dragged away through the newly recovered stretch of land. We’ve now received confirmation that we do NOT have Great Crested Newts in the lock chamber, which is a great relief. Apparently we have smooth newts, which will leave the water when they’ve finished rearing young, so work should not be held up.

The only remaining test now is to check out impact on trees, which has been held up waiting for details of the works design. We now think we’ve resolved this chicken and egg challenge and the end of June should see the completion of this report and the formal design resumed. On a positive note we have again seen the support of Erewash Borough Council, who have allocated a significant sum of S106 funding to our Sandiacre works. This should be sufficient to fund the contractors works and some of the lock rebuild.

At Draycott, Eddy and Di have been busily setting up rafts to record water vole numbers. This should be invaluable in helping to secure a trapping licence in the new year and ensuring we have enough space to accommodate the trapped voles in the receptor area. We have made good progress with the drainage expert to provide an expert view on how to handle land drains and the flow of water along Hopwell Road in flood conditions. We are now looking at options to see which is best for us.

Progress is still good with the launch of an able bodied passenger service, and we are still looking at July. As planned the 32 Amp charging point has been installed, although we are still waiting for a meter, and we have a date for bollard and pigeon netting to be installed. The security fencing is now awaiting sign off from a “conservation officer”, but subject to that should be installed in a couple of weeks.

We have also moved on with other matters—we have applied for a boat licence from the Council and I have personally applied to be licenced as a boatman. Fortunately, I passed the medical, DBS, etc, so now we await the issue of a formal licence, which will allow us to operate. We have training sessions for the additional volunteer boatmen organised during the last week of June and if all goes well those volunteers will also be applying for licences—following my lead. As you’ll see below our July meeting is aiming to offer a few trips as part of the members meeting (fingers crossed), but with capacity limited we’ll be taking reservations at the June meeting.

Phase 2 requires us to submit planning permission for the disabled boarding facilities and get an update on the existing environment agency permit. We finally have detailed drawings from the Council and have undertaken tree and ecological surveys so Duncan will be submitting the planning application next week. The EA application has already been submitted. This means the full construction will be undertaken by the City Council around September—we hope.

We have now had a second review of progress on the Atkins report on river development in Derby. We are now getting a better idea of the costs involved on the various elements, which is a crucial factor in any feasibility. Atkins have also been reviewing the canal restoration as a key factor in introducing boat tourists and justifying sustainability. We are expecting a final report at the end of July and are now in talks with St Modwens to ensure we don’t miss the opportunity as their triangle site is built out. The City Council remains very supportive in this.

Thank you to those who have volunteered to man our marquees at shows. Obviously the more we have the easier for everyone, so don’t be shy. You don’t need lots of knowledge, just a desire to help and a friendly demeanour!

We attended the Spirit of Chellaston event on the only rainy day in a fortnight during mid June, but we were pleased with the result. We attracted considerable interest and a few new members and we achieved our aim of publicising the plans in the area and met two local Councillors who have agreed to promote our project.

Future events this year are: 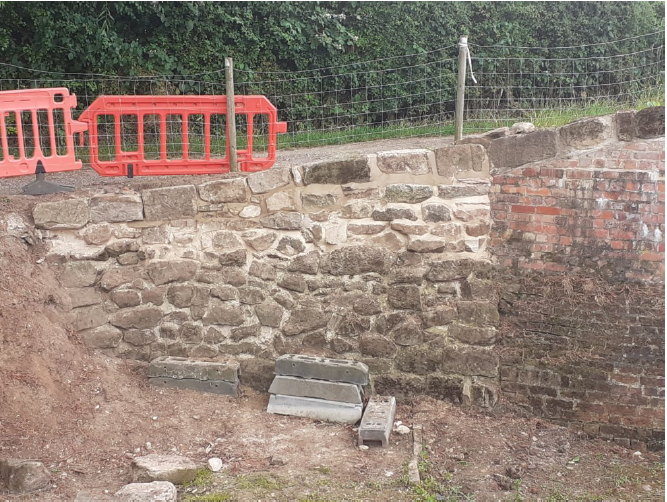 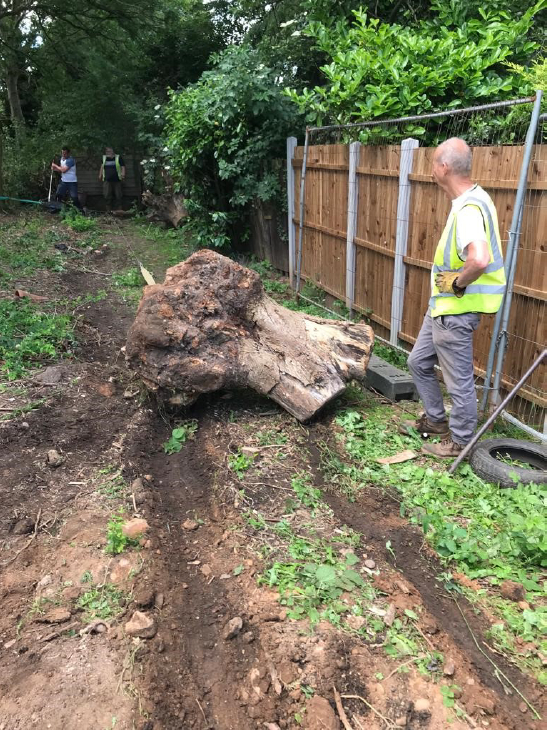 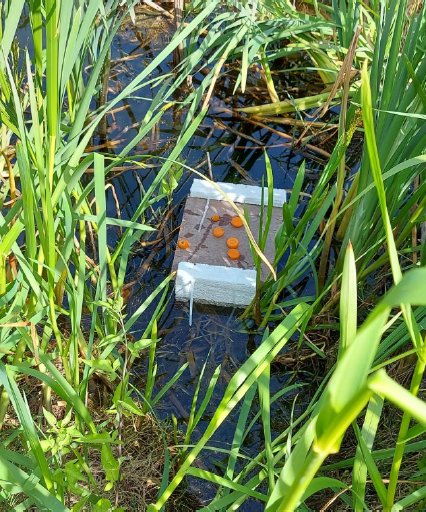 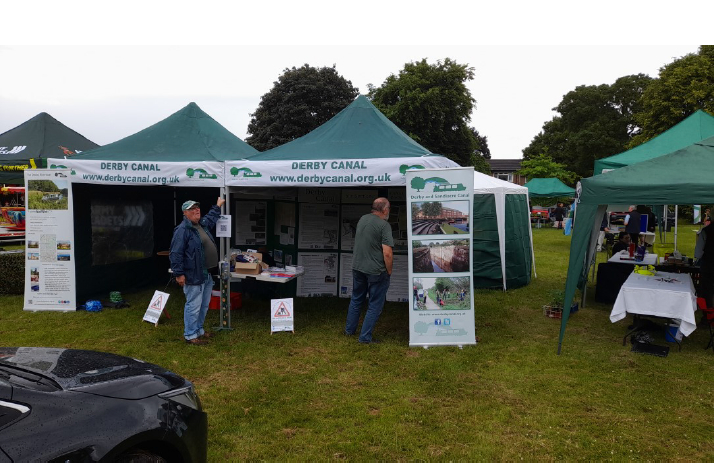 Thanks to those who came along to the Beeston Lock Cottages presentation—it was a fascinating summary of how they achieved it, which was very different from our own experience at Draycott. We had a much better attendance and we were able to canvas views around how the meetings should work. Location and timing seemed fine, but those present wanted content that was more canal relevant.

As a result we have changed the next meeting, as apparently you’d all like to see some info on the Draycott restoration! I’ll try to keep it down to an hour (or so)! We have planned forward future meetings as you can see and are looking to organise an AGM once we have audited accounts. This is likely to be a Wednesday evening in September. Indoor Meetings at the Draycott Cottages, First Floor

Take care and I hope to see you soon.
Chris Madge